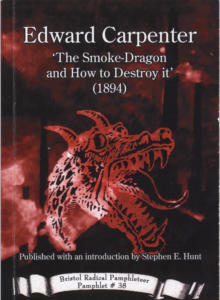 The Smoke Dragon and How to Destroy It

First published in The Clarion in 5 parts in 1894

with an introduction by Stephen E. Hunt

Edward Carpenter’s ‘The Smoke Dragon and How to Destroy It’ is a minor environmental classic by one of the late 19th, early 20th century’s most politically progressive thinkers and writers.

Edward Carpenter (1844 – 1929) was a significant activist in a network of environmentally concerned individuals and societies combating what they termed the smoke nuisance. They challenged a preventable social evil that had caused thousands of premature deaths and would cause many more in the years to come, culminating in the notorious Great Smog that benighted London in 1952. Carpenter’s preoccupation points to a largely overlooked history of an immense magnitude of suffering, including thousands of forgotten deaths signifying countless real human tragedies at the heart of British city life.

Furthermore, in the guise of photochemical smogs, air pollution due to the combustion of fossil fuels continues to undermine the health and shorten the lives of thousands of people throughout the world in the present day. It is a horror which for the most part must still be attributed to human causes rather than smoke dragons, as toxic emissions degrade air quality, undermining the well-being of urban populations across the globe.

At a time when the future of fossil fuels is under great scrutiny. It is a reminder that the driving force of Industrialisation unleashed a Promethean power that, alongside unlimited social transformation, brought about mixed consequences for humanity and unprecedented threats to the natural world.

In the present day Carpenter continues to be known by different constituencies of interest and was a man of many banners. Pink Carpenter was a gay activist and sexual libertarian. Red Carpenter sought to straddle, arbitrate and synthesise the increasingly fractious strands of socialism and the labour movement.

Black Carpenter was willing to declare himself a fellow anarchist alongside the Walsall anarchists at a time when anarchism was heavily stigmatised.

Green Carpenter demonstrated proto-environmentalist sensibility. It is this green Carpenter that emerges in the present pamphlet, a pivotal figure who draws upon Romantic objections to the despoliation of the natural world and anticipates twentieth century concerns. He goes so far as to suggest that pollution may not just be blighting the countryside and city life but that human activity was starting to change the climate and impact upon the broader environment. In the pages of the ‘Smoke-Dragon’ it becomes evident that alongside Carpenter’s reputation as a seer and visionary, therefore, he should be remembered as a social commentator and campaigner with a practical knowledge of physics and chemistry, a sure grasp of manufacturing and economics and an interest in climatology and human geography.

Carpenter’s contribution to the smoke nuisance debate was, therefore, a part of organised opposition to air pollution that had emerged at least half a century earlier. Direct personal experience of the problem explains his first concern with the impact of coal smoke, given Rowbotham’s description of his move to 1870’s Sheffield as having ‘landed in the midst of an environmental disaster. In his autobiography,

My Days and Dreams, Carpenter recalled that he lived in the centre of Sheffield for a year, sleeping above the Sheffield Socialists’ shop and café in Scotland Street where he was ‘exposed to showers of blacks which fell from the innumerable chimneys around’ which quickly began to tell on his physical health and made him realise ‘the terrible drawback to health and vitality consequent on living in these slums of manufacturing towns’.

nuisance. His entry into the debate began in Sheffield in the 1880’s, was probably inspired by attendance at one or both of the 1881 -1882 exhibitions on smoke abatement held in South Kensington, London and Deansgate, Manchester. Thereafter the smoke nuisance was increasingly challenged. Indeed Chushichi Tsuzuki goes so far as to credit Carpenter with instigating the wide ranging public debate on the problem through the letters and lectures that he gave following the exhibitions, arguing that ‘it was only after the publication of Carpenter’s letters that the issue was revived. Carpenter’s intervention was informed by wide reading on air pollution and mechanisms to prevent it, as evidenced by his citation of the foremost experts on the subject in ‘The Smoke Dragon’, namely: Rollo Russell, John Leigh, Herbert Fletcher and T. Patterson. Attitudes began to shift in his home city. Peter Thorsheim records that Benjamin Burdekin (1831 – 1906), of the Sheffield Smoke Abatement Society, drew up a petition in 1889 which attracted 5,800 signatures.

Carpenter’s contribution to the smoke debate particularly stressed the negative impact of air pollution upon the natural environment, with its consequences for human well-being. He also helped to formulate a distinctively socialist response to the problem. It is the voice of Carpenter the proto-green that can be heard in several writings about the smoke nuisance including ‘The Smoke Dragon and How to Destroy it’. During the late 1880’s and early 1890’s the ‘smoke nuisance’ became a significant preoccupation for Carpenter who became an early environmental activist. He tackled the topic and rehearsed his arguments before the publication of the serialised essay in The Clarion. His ideas were covered in two contributions to the Sheffield Daily Telegraph. On 26th October 1889 Carpenter delivered a lecture on the smoke problem to a packed audience at Firth College, Sheffield. This was reported at length in both The Sheffield Daily Telegraph as ‘The Smoke Nuisance: its Cause and Cure’ and The Sheffield and Rotherham Independent as ‘Sheffield Smoke: its Evils and Remedy’.

Carpenter also wrote a letter to The Sheffield and Rotherham Independent captioned ‘Smoky Sheffield’. His more extensive article for Macmillan Magazine – ‘The Smoke Plague and its Remedy’ (1890) was an earlier version of The Clarion series.

In his 1889 lecture Carpenter articulated the concerns, later developed in ‘The Smoke Dragon’ about the deterioration of the natural world, even including, he speculated, the climate. He alluded to:

……….the enormous tracts of country over which now, owing to our habits, a thin film of smoke floated, which, while it did not prevent the ordinary occupations of life, just blurred the perfect purity of the sky and obscured the land with a sense of sadness. We had all an impression that the climate of England was not so fair as it used to be in the good old times, when our land was indeed “Merry England” and the month of May was all sunshine and flowers. What if it be so, and the truth that the climate was worse than it used to be – that there was more rain, more cloud, more fog, and that we had made it so?