The Resource Centre is now open

Recent addition to the Principle 5 Library 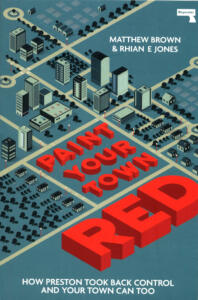 How Preston Took Back Control and Your Town Can Too

Across the world, there is a growing recognition that a new kind of economy is needed: more democratic, less exploitative, less destructive of society and the planet. Paint Your Town Red looks at how wealth can be generated and shared at a local level through the experience of one of the main advocates of the new Democratic Economy, Matthew Brown, the driving-force behind the world-recognized Preston Model.

Preston’s success shows that the ideas of community wealth-building work in practice and have the capacity to achieve a meaningful transfer of wealth and power back to local communities.

Matthew Brown is Labour’s leader of Preston City Council and a senior fellow for the Democracy Collaborative, tasked with promoting Community Wealth Building across the UK and abroad.

Rhian E. Jones is a writer, historian and author of four books on politics and popular culture. She is a founding editor of the New Socialist website and now edits Red Pepper and writes for Tribune magazine.

The on-line index can be searched at:

Co-operative news was indexed for around 50 years from it’s first edition in 1871. It had not been indexed since the First World War. The current indexing is proceeding steadily.

Co-operative News became a monthly magazine from February 2017. Since that date, articles can be searched and read on the Co-op News website: https://www.thenews.coop/uk/

Co-operative News has been digitalised from February 2017 and can be accessed in this form at:

NOTE: the most recent editions are not available on the yumpu site.

You can view the Principle 5 catalogue HERE

During the 1920s and 30s The Sheffield Co-operator was the only paper in Sheffield to constantly advocate co-operative principles and promote co-operatives. It reported on all of the issues which were of interest to people in Sheffield and refuted the negative reporting from the mainstream press towards co-operatives at that time.

Principle 5 has revived ‘The Sheffield Co-operator’ and has so far published three editions.

The October 2020 edition of Co-operative News carries an article about the ‘Sheffield Co-operator’.

The Revival of the Sheffield Co-operator – Co-op News

A co-operative is an autonomous association of persons united voluntarily to meet their common economic, social, and cultural needs and aspirations through a jointly-owned and democratically-controlled enterprise.

Co-operatives are based on the values of self-help, self-responsibility, democracy, equality, equity and solidarity. In the tradition of their founders, co-operative members believe in the ethical values of honesty, openness, social responsibility and caring for others.

The co-operative principles are guidelines by which co-operatives put their values into practice.

Co-operatives are voluntary organisations, open to all persons able to use their services and willing to accept the responsibilities of membership, without gender, social, racial, political or religious discrimination.

Co-operatives are democratic organisations controlled by their members, who actively participate in setting their policies and making decisions. Men and women serving as elected representatives are accountable to the membership. In primary co-operatives members have equal voting rights (one member, one vote) and co-operatives at other levels are also organised in a democratic manner.

Members contribute equitably to, and democratically control, the capital of their co-operative. At least part of that capital is usually the common property of the co-operative. Members usually receive limited compensation, if any, on capital subscribed as a condition of membership. Members allocate surpluses for any or all of the following purposes: developing their co-operative, possibly by setting up reserves, part of which at least would be indivisible; benefiting members in proportion to their transactions with the co-operative; and supporting other activities approved by the membership.

Co-operatives are autonomous, self-help organisations controlled by their members. If they enter into agreements with other organisations, including governments, or raise capital from external sources, they do so on terms that ensure democratic control by their members and maintain their co-operative autonomy.

Co-operatives provide education and training for their members, elected representatives, managers, and employees so they can contribute effectively to the development of their co-operatives. They inform the general public – particularly young people and opinion leaders – about the nature and benefits of co-operation.

Co-operatives serve their members most effectively and strengthen the co-operative movement by working together through local, national, regional and international structures.

Co-operatives work for the sustainable development of their communities through policies approved by their members.

More information about the values and principles can be found at: www.ica.coop

The Principle 5 Collection is now fully catalogued. The archive and library material can be downloaded from the archives page

• Protect and safeguard the books, publications, archival materials and resources placed in trust for the use of the co-operative movement and for future generations.

• Make these available to all members who would wish to use them.

• Support the development of co-operative education and culture.

• Work co-operatively with other organisations and individuals who have compatible aims.

• Be as true as possible to the ICA Statement of Co-operative identity (Values and Principles).