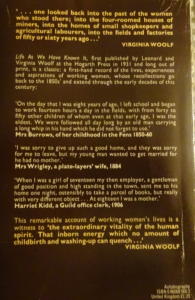 with a new introduction by Anna Davin

The Remarkable women who wrote this book were members of the Women’s Co-operative Guild. Founded in 1882, by 1930 when this book was written it had nearly 1,400 branches and was 67,000 strong. It flourished under Margaret Llewelyn Davies, Secretary from 1889 – 1921, a woman Leonard Woolf called ‘one of the most eminent I have ever known’.

The Guild became a most important agent in the education of women and the lives recorded here demonstrate the need the Guild fulfilled, the eagerness with which working women grasped opportunities to learn, to act, to help themselves and others.

They tell of their childhood – of growing up in poverty and want; of work – begun in most cases when still children, of domestic service, work in factories, work in fields; of family life – of husbands too often old and ill before their time, of childbirth, marriage, death.

Life As We Have Known It is a remarkable record of women’s experiences and a monument to ‘these humorous and vigorous and thoroughly independent women’.