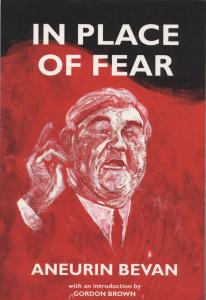 In Place of Fear

with preface by Geoffrey Goodman

and an introduction by Gordon Brown

This edition published by the Aneurin Bevan Society

in association with UNISON in 2008

Aneurin Bevan was born in Tredegar, Monmouthshire in, 1897 and when barely 14 years old started working down the coal mines. Having become active in the trade unionism of the South Wales coalfield, he led the Welsh miners in the general strike of 1926, and in 1929 was elected MP for the Independent Labour Party in Ebbw Vale. He joined the Labour Party in 1931, and quickly built a reputation as an inspirational orator . Having been appointed Minister of Health in the Attlee Government of 1945, he masterminded the founding of the National Health Service in 1948, resigning from the cabinet over the issue of National Health charges in1951, not long after becoming the Minister of Labour. He died in 1960.

“Much has changed since the NHS came into existence in 1948 and since he wrote IN PLACE OF FEAR four years later. But it is remarkable just how many of the issues raised by Bevan still have resonance today”.