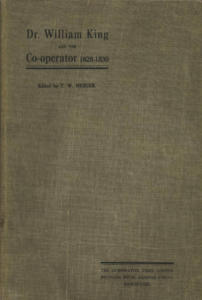 Dr. William King (1786 – 1865) was a medical practitioner in Brighton who promoted a Mechanics Institute in 1825. His interest in Owenite literature led him to encourage the setting up of two co-operatives in Brighton in 1827.

The first was to raise by a small weekly subscription a fund for the purpose of assisting persons to join co-operative communities and to spread knowledge of Co-operation. The second engaged in retail trade with the object of accumulating capital from its profits to eventually establish a community.

Unlike Owen and Holyoake, King was a Christian and his advocacy of Christianity is evident in his writings.

He wrote and published a monthly paper (1828 – 1830) called ‘The Co-operator’ which had a wide circulation, especially in the North and the Midlands. It exercised a profound and lasting influence on the Co-operative Movement and converted hundreds if not thousands to the Cause. King was not a wealthy man and he could not afford new editions when it went out of print. However some people had the wisdom to bind their copies together and these continued to serve as something of a text-book for the Movement. One of the Rochdale Pioneers – James Smithies had such a volume and he and the pioneers of Rochdale studied and discussed it. When they formed their society in 1844 they were obviously very influenced by the ideas of Dr King.

In 1922 the General Publications Committee of the Co-operative Union decided to re-print ‘The Co-operator’. The volume includes all 28 editions, plus a sketch of William King’s life and previously unpublished material.

At the beginning of the volume are these words by Dr William King:

“Co-operation is a voluntary act, and all the power in the world cannot make it compulsory; nor is it desirable that it should depend upon any power but its own.”—The Co-operator,1829.