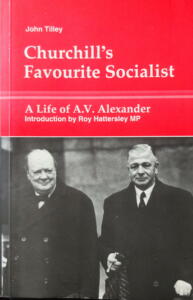 A.V. Alexander was elected as the Co-operative MP for Sheffield, Hillsborough in the 1922 General Election and he served as MP for Hillsborough until 1950 with one break in (he lost his seat in 1932 and regained it in 1935). From 1929 as a result of the electoral agreement with the Labour Party, like all other Co-operative MPs, he stood on a joint Co-operative and Labour ticket.

“Perhaps if A.V. had not lost Hillsborough and had become at least Deputy Leader of the Labour Party in 1931, The Co-operative economic policy might have had a greater influence”.

This is a very readable and interesting biography. The Sheffield Co-operator reported all of his activities from its first edition in 1922 to its last in 1939.

Also recommended ‘The myth that will not die: the formation of the National Government 1931’ by Humphrey Berkeley.